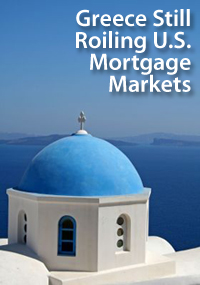 Conforming and FHA mortgage rates fell for the second straight week last week, and closed out Friday with favorable momentum to the downside.

The first is tied to the Eurozone.

Although the Greek Parliament reached agreement on austerity measures for the nation-state two weeks ago, concerns that a debt crisis could spill into Italy, Portugal, Ireland, and/or Spain resurfaced last week. The debt of both Ireland and Portugal was downgraded to Junk status, and Italy and Spain may follow soon.

The second story was the just-released Fed Minutes. Notes from the FOMC meeting showed that Ben Bernanke & Co. debated a slowing U.S. economy, the weakening domestic jobs market, and whether a third round of economic stimulus would be necessary. This, too, dragged mortgage rates lower.

The third story is one that’s still forming — the U.S. Debt Ceiling Debate. For now, the issue remains on the market periphery, but as the August 2 debt limit deadline nears, expect more influence over day-to-day mortgage rates.

Mortgage rates are low but remain volatile. If you’re wondering whether now is a good time to lock your rate, consider that it’s better to be safe than sorry. If mortgage rates rise this week, the rise may be permanent.

Rates can only stay low for so long.