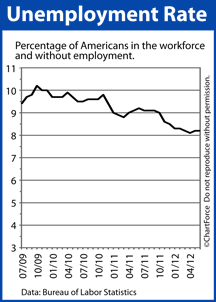 In it, the Bureau of Labor Statistics showed that the economy added 80,000 net new jobs in June, and that the initial tallies for April and May were overstated by a combined two thousand jobs. Wall Street had expected to see at least 100,000 jobs created in June.

When the actual number of jobs fell short of expectations, stock markets sold off and bond markets gained.

Both products set record-low mortgage rates, based on Freddie Mac’s data. However, by the week’s end, after the jobs report, both rates had moved lower still to the benefit of home buyers and rate shoppers.

This week, with little new economic data set for release, mortgage markets are expected to turn attention back to Europe. Early Monday, Greece’s new government won a key confidence vote in Parliament which ends a period of uncertainty during which the nation-state was without a clear leader.

This is one step toward resolving the debt issues that have plagued Greece but not the last step. How markets respond to Greece’s next actions will, in part, shape the direction of mortgage rates here in the United States. With optimism, mortgage rates will rise.

Mortgage rates are expected to remain volatile for at least the next 3 weeks. If you’re floating a mortgage rate or wondering whether it’s time to lock a rate with your lender, consider locking in. With mortgage rates at 3.62% on average, rates have much more room to rise than to fall.