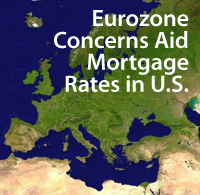 Last week’s low mortgage rate drivers are primarily European. Joining the debt concerns that have dogged Europe since March, a fresh wave of doubt has surfaced about the health of some Eurozone banks. The fears sparked a new wave of safe haven buying.

Global equities were socked last week and the Dow Jones Industrial Average fell for the 4th straight week. For home buyers , though, the timing may be perfect. As stock markets lose, bond markets gain and when bond markets gain, mortgage rates drop.

According to government-group Freddie Mac’s weekly mortgage rate survey, the average 30-year fixed rate mortgage fell to 4.17% last week with 0.7 points. This is the lowest rate-and-points combination in history.

When rates rise, they could tack on 0.500% or more overnight.

This week, there is a lot that can move mortgage rates. With housing data set for Tuesday release, the Eurozone stories still unfolding, and three Treasury auctions planned, it’s best to be ready for locking.

If you’re floating a mortgage rate or still shopping, consider locking your rate as soon as possible. Rates trended higher to close out last week and will be riding that momentum forward. Rates are lower than they’ve been in history.

Take advantage of it.